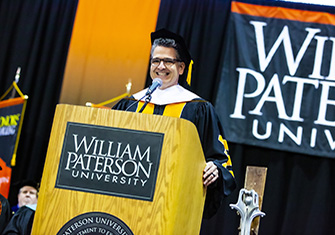 Carlos A. Medina gives the keynote address at the Undergraduate Commencement Ceremony 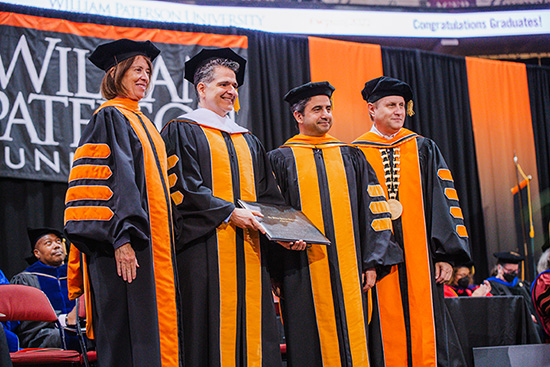 Hispanic business owner, civic leader and television host Carlos A. Medina, president and CEO of the Statewide Hispanic Chamber of Commerce of New Jersey and president of Robinson Aerial, gave the keynote address at William Paterson University’s 2022 Undergraduate Commencement Ceremony on May 18 at the Prudential Center in Newark.

During the ceremony, Medina was awarded an honorary doctor of humane letters degree for “his achievements as an entrepreneur, his advocacy for and commitment to growing the Hispanic business community in the State of New Jersey, and his dedication to serving the community at large.” The award was presented by Michael Seeve, chair of the University’s Board of Trustees, University President Richard J. Helldobler, and President Emerita Kathleen Waldron.

In January 2019, Medina became president and CEO of the Statewide Hispanic Chamber of Commerce of New Jersey (SHCCNJ), having served as its chairman since 2012 and as a member since 2005. The organization represents 119,000 Hispanic-owned businesses in New Jersey that contribute more than $20 billion annually to the state’s economy. In conjunction, Medina in 2019 co-founded and became the chairman of the Hispanic Chamber Fund, a loan program that helps Hispanic Chamber member business owners and entrepreneurs across the U.S fairly and transparently gain access to capital to help them build, grow, and expand their businesses.

He has been dedicated to raising awareness for and promoting diversity in entrepreneurship. He serves as executive producer and host for Que Pasa NJ on New Jersey PBS; the show, in its third season, features in-depth discussions with Hispanics from business, culture, politics, nonprofits and academia, as well as non-Hispanic influencers and allies. He is also a regular contributor for Univision New York and often discusses important issues with New Jersey and New York media outlets.

Medina is the president of Robinson Aerial, Inc., a firm specializing in mapping and engineering with a long and rich history in New Jersey. As president and majority owner of the company since 2009, he has led an expansion into services such as construction management and GIS mapping, among others.

A graduate of Rutgers University-Newark, Medina earned a law degree from Rutgers Law School. He is currently a member of the board of Horizon Blue Cross Blue Shield of New Jersey and the advisory board of the New Jersey Salvation Army, a trustee of the Hudson County Economic Development Authority, and a member of Governor Murphy’s ReStart the Economy Task Force. He has served as a board member of New Jersey Economic Development Authority, where he served as chairman of the Real Estate Subcommittee for several years.