In the News: WP’s 2022 Undergraduate Commencement Ceremony and Graduates 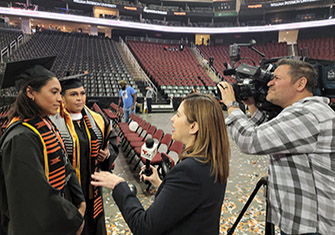 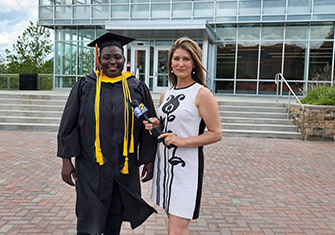 News outlets in the New York City-metro area, and some on a national level, covered this year’s undergraduate commencement ceremony at the Prudential Center, graduates with exceptional Will.Power. stories, and our commencement speaker.

Though publicity for our graduates continues this week, and may continue into next week, following are some highlights thus far.

The Record newspaper/NorthJersey.com highlighted mother/daughter graduates Minerva and Janais Martinez in a feature story that ran both on the front page of the newspaper and its website. The website version also included a photo gallery covering the undergraduate ceremony. Minerva (double major in psychology and sociology), a mother of five who moved to the U.S. from the Dominican Republic in her 20s, graduated along with her daughter Janais (musical performance/classical voice), who sang the National Anthem for our undergraduate and graduate commencement ceremonies. The Record’s story was also published by YahooNews.com.

Telemundo 47 Nueva York also highlighted Minerva and Janais Martinez with a Spanish-language primetime evening television report including footage from the celebration in the Prudential Center. Thereafter, Telemundo TV, the national network, aired a version of the story on its afternoon news and talk show “Su Casa.”

WCBS News Radio 880 featured student Thomas Scalora during its morning drivetime newscast on the day of our undergraduate ceremony. Scalora, at age 69, is the oldest member of the Class of 2022. He is a retired chemist who returned to William Paterson for a degree in music studies.

The News 12 television stations in the tri-state area also reported on Scalora, using video footage produced by the University, in its “Jersey Proud” segment. Another story about Scalora, by a reporter at the Star-Ledger newspaper/NJ.com, is expected in the coming days.

ROI-NJ published a story announcing our undergraduate commencement ceremony’s speaker, Carlos Medina, president of the New Jersey Hispanic Chamber of Commerce. The Record newspaper/NorthJersey.com also wrote about Medina’s featured role in our ceremony, and interviewed him on some of the themes of his address, grit and philanthropy.