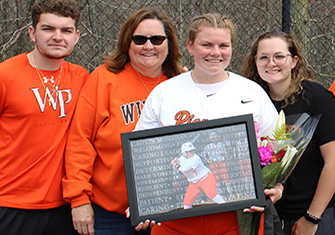 When Caitlin Monahan walks across the Prudential Center stage at William Paterson University’s Commencement May 18, she will simultaneously follow in someone else’s footsteps and blaze a path for those to come.

“William Paterson has given my family and me opportunities to excel both academically and athletically,” Caitlin said. “I am proud to have played on the same place on the softball field as my mom, as well as have her a part of my college life at her alma mater!”

“We are beyond proud of Caitlin, who persevered through adversity to accomplish her goals,” said Erin, who also was a 1,000-point basketball scorer for the Orange and Black before spending the last 29 seasons as their head coach. “She continually worked hard to achieve the things she wanted most, including student teaching, while playing the game she loves.”

For the Monahan family, William Paterson truly is a family affair and a home away from home.