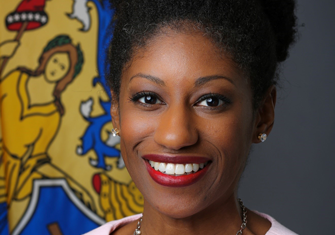 New Jersey Secretary of Higher Education Zakiya Smith Ellis will give the keynote address when William Paterson University celebrates its 2020 graduates during a virtual commencement ceremony on Tuesday, May 26. The ceremony will be accessible online to graduates, their families and friends, and the entire University community at 9 a.m. via a link posted on the University’s website.

A total of more than 2,400 doctoral, master’s, and bachelor’s degree candidates will have their degrees conferred during the ceremony by University President Richard J. Helldobler, who will also address the graduates. In addition to Secretary Smith Ellis, other speakers include Michael Seeve, chair of the William Paterson University Board of Trustees; Domenico DiMaio, president of the William Paterson University Alumni Association, Joshua Powers, provost and senior vice president for academic affairs, and students Qynn Pascual, who will receive a bachelor’s degree in English and secondary education, and Bryan Kopko ‘18, MBA ’20, who received a master’s degree in business administration in January.

In addition to the remarks, which will be prerecorded, the graduates, their families, and guests may view individual slides dedicated to each graduating student that include the degree candidate’s name, degree, and major, and can be personalized with a photo and a quote or message. Graduates can share their slides on social media.

Secretary Smith Ellis currently serves as New Jersey’s Secretary of Higher Education, where she is responsible for the policy development and coordination of higher education activities for the state. She was recently named as one of three co-chairs of Governor Murphy’s Restart and Recovery Advisory Council, which will bring together leaders from various industry, community, and faith-based groups and institutions across New Jersey to advise state leadership on economic issues impacted by the coronavirus pandemic.

She previously led work at the Lumina Foundation, the nation’s largest foundation focused solely on higher education, to advance federal policy to increase attainment and to develop new postsecondary finance models, focusing on issues of affordability.

Prior to her work in philanthropy, Secretary Smith Ellis served as a Senior Advisor for Education on the White House Domestic Policy Council, where she was tasked with developing, informing, and promoting President Barack Obama's higher education policy. She also served in the Obama administration as a senior adviser at the U.S. Department of Education, where she developed programmatic, policy, and budget solutions to respond to pressing challenges in college access, affordability, and completion.

Before transitioning to work as a political appointee, Secretary Smith Ellis served as director of government relations for the Advisory Committee on Student Financial Assistance, where she authored reports on the efficacy of financial advising in college access programs, on community college transfer and articulation, and on the ability of low- and moderate- income families to afford college more broadly.

Earlier in her career, Secretary Smith Ellis worked directly with students in various capacities across the K-12 system. She worked on staff in various capacities for Teach for America, helping to train new teachers, and for the federal GEAR UP program in East Boston, Massachusetts, providing college preparation and financial aid information to high school students. She was introduced to federal policy as an intern on Capitol Hill with the Congressional Black Caucus Foundation, working for her former hometown congresswoman.

Secretary Smith Ellis has been featured on C-SPAN and Fox Business News, profiled in the Chronicle of Higher Education and Diverse Issues in Higher Education and was twice named to Forbes magazine’s 30 Under 30. She recently completed a three-year term as an appointed member on the board of directors for the National Association for College Admission Counseling.

William Paterson University is a leading public university in New Jersey with more than 10,000 students and nearly 80,000 living alumni. The third oldest public institution in the state, the University was chartered in 1855 and offers undergraduate, graduate and doctoral degree programs through five academic colleges: Arts and Communication, Cotsakos College of Business, Education, Humanities and Social Sciences, and Science and Health. Located on 380 hilltop acres in Wayne, the University provides a wide range of learning opportunities in its classrooms, laboratories and other state-of-the-art facilities, as well as other opportunities including research collaborations with faculty, internships and civic engagement activities. The institution’s 400 full-time faculty are highly distinguished and diverse scholars and teachers, including numerous Fulbright Scholars and recipients of many other awards, grants, and fellowships.